The European Roundtable on Climate Change and Sustainable Transition (ERCST) is an independent nonprofit organisation working on European and Global climate change policies.

Our staff combines the experience of senior policy analysts with the enthusiasm and ideas of younger researchers to deliver high-quality outputs.

As part of the ongoing series of discussions on the European Green Deal, the Climate Law and the 2030 climate targets, ERCST organised  high-level webinar, which was an opportunity for participants to reflect on the process and implications of the review of the 2030 target, how it is articulated with the climate law discussion, and how the increase in ambition can be financed, taking into account the Recovery Package and the updated MFF proposal. (Event Page)

How to survive and thrive in environmental markets

This virtual conference brings in-depth insights to navigate the vast uncertainty cast over environmental markets by the COVID-19 pandemic as the ongoing virus outbreak is causing significant shifts in carbon and wider markets. Leading analysts, government representatives and industry leaders will speak on how the global recovery is taking shape and what this means the EU ETS and other aspects of the European Green deal, the CORSIA aviation offsetting mechanism and corporate attitudes to tackling climate change. ERCST's Executive Director, Andrei Marcu, will join the panel. 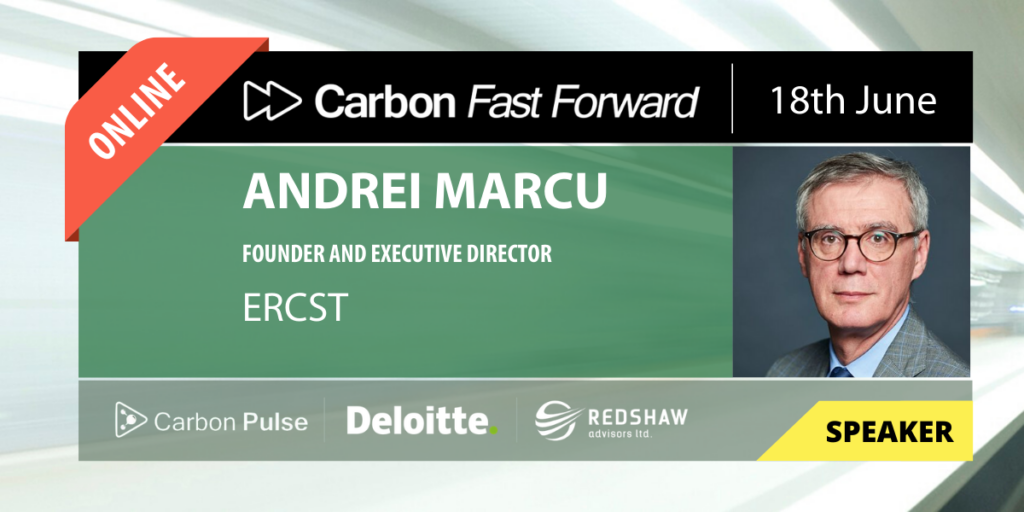 President Ursula von der Leyen's European Commission released the communication on the ‘European Green Deal’ on December 11th 2020. It present the outline of the new Commission's commitment to tackling climate and environmental-related challenges, and is presented as a new growth strategy aimed at transforming the EU’s economy.

In essence, it can be seen as a collection of priorities, principles and areas where legislative proposals will be produced in the coming years, aimed at achieving net-zero emissions by 2050, and other environmental objectives.

In recent months, many of these legislative and non-legislative initiatives have been initiated, and for most public participation possibilities exist e.g. in the form of providing feedback or responding to surveys.

ERCST has produced a tracker outlining the policy files which have been kick-started by the Commission, and for which feedback opportunities exist. This tracker is a living document which will be updated on a regular basis.

First article of the Marcu My Words series with Carbon Pulse

The proposed Climate Law must not become an irreversible fait accompli. It has to be reinvented, time and again, and find ongoing support through continuous societal debate. The lack of vigorous societal debate on a proposal that is intended to reshape how Europeans work and live raises important questions about the political process leading up to this historical outcome. (...) With its sweeping scope and ambitious objectives, the Climate Law will recalibrate the parameters of economic activity across the continent. In particular, it will dramatically narrow the options available to member states when they decide on how to meet their current and future energy demand.

The intergenerational lock-in effects demand that we include a process for the periodic evaluation and review not only of our progress towards the objectives of the Climate Law, but also for those objectives themselves and their underlying assumptions. Just as the societal consensus on the appropriate response to climate change has continuously evolved in the past, we should expect it to continue doing so in the future. (...) At the very least, therefore, the architects of the Climate Law would be well-advised to seek consensus in the Council and incorporate a tangible, transparent process of continuous engagement with European civil society.

The yearly State of the EU ETS Report aims to be an independent contribution to the policy debate, which is needed to ensure that the EU ETS is “fit for purpose.”

It is intended as a “snapshot”, providing policymakers and stakeholders with an overview of how the EU ETS is doing by April of each year, based on previous year data.

This report is jointly produced by ERCST, BloombergNEF, the Wegener Center and Ecoact